We in no way could have predicted that the start of the season 2020 was going to be different to other years in so many ways.

Last year we arrived on the island in the most heart-warming, perfectly calm, bright day, which was also the warmest one ever recorded in winter in the UK - 27th of February.
This year the stormy weather has held us on the mainland for an additional week. Long weeks of wind and rain almost penetrated to the marrow of everyone's' spirit allowing us to believe that the inhospitable in some places chills and floods wouldn't ease out.
We came trooping through the treacherous yet graceful at the same time waters to soon find ourselves chattering gaily over a tea and forgetting about the millions of heavy bags we carried up the 87 landing steps.
The decision about our crossing was not an easy one as the conditions were far from ideal but other than sailing in a bumpy sea, water splashing from side to side occasionally, everything went astonishingly smoothly. A bunch of fabulous people (Chrissy, Gary, Mark, Rob and Gail) helped us load all our bags and boxes onto the ever standing, still smelling of paint freshly refurbished Dale Princess and irreplaceable Karl and Phil transported us to the beloved island. We send a thousand thank you to Gareth from Dale Sailing for being incredibly helpful and understanding about our off and on goings to the island. We send a thousand kisses to Vicky for being so accommodating in Cardiff, well outside the city too! We send a thousand hugs to the ever smiling, joyful Sue, who together with Phil, without hesitation welcomed us to their gorgeous home.
In all the honesty, it's quite unbelievable how quickly a week had passed during our comfortable stop over at Phil’s and Sue’s house. The image of Sue, bending over her patchwork on the sitting room sofa frowning with concentration will stay with us for a while.
We also send a thousand smiles to Mark for being there for us as if he was a knight in a shining armour who is always ready to rescue someone. In fact, saint is what he should be called! 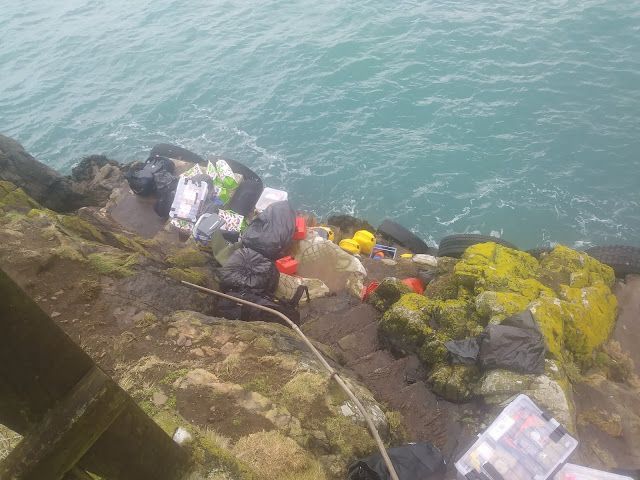 After an eventful day, we had come into our bedrooms, in the twilight of a cold, grey early March evening and shrank gracelessly into our beds to soon peacefully join the stillness of the night for the first time on Skomer this year.

It was the 6th of March when we arrived, accompanied by the new Skomer Assistant Warden Ceris and soon joined by Catrin, Skomer new Visitor Officer.
Both of these radiant women are full of enthusiasm, energy and are absolute assets to us and the island.
One of our long-term volunteers was able to join us early. Fantastic and very hard working Rhian is going to stay with us throughout spring and part of summer and we really hope that she is going to have a splendid time on Skomer.
We are thrilled to have them as part of the 2020 team.

Everything here is so beautiful, so mysterious – the ever changing landscape, the dramatic sunrises and sunsets, the seabirds, the migrants, the whole atmosphere of wealth and culture of the island. There is no doubt that Skomer has already stolen all the three hearts.
The following days our team and the work party volunteers spent having many teas and working hard on some of our high priority maintenance jobs, which needed to be completed before the season starts. In a trice everyone finished more tasks than we had anticipated only leaving room for wonder.
Much was achieved during their stay, which includes the new gate in the backyard, Amos hide repairs and installment by the incredibly skillful master of carpentry Howard. Steps to the compost loos, Moorey Mere hide floor and the water system at the Farm were fixed by the fantastic Martin and Nigel who also caused a massive jaw-drop by showing off their absolute Pop Master genius by knowing practically all the songs ever played on the radio. They made us promise not to make a sound at all at 10:30am unless it was a title of a song. It was a fair request but we still couldn't but giggle at the seriousness of the situation and their sincere but smiley eyes. 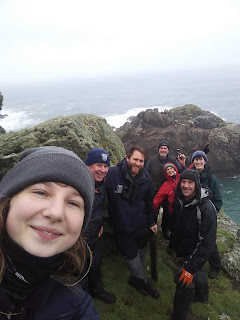 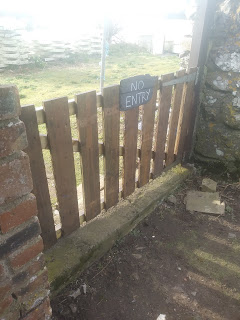 Weather has been considerably less stable than last year in March and we have experienced a few cold spells and plentiful of wind. However, the last few days have been absolutely beautiful and a bit of sun has cheered the birds up increasing their movements and display, also allowing us to drop a layer or two out of many, won't dare to spell the figures. 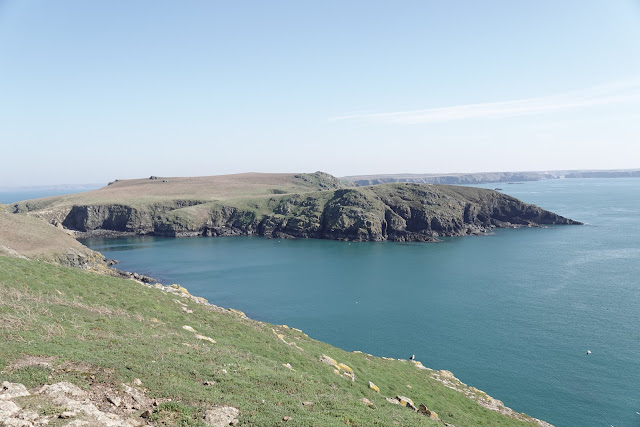 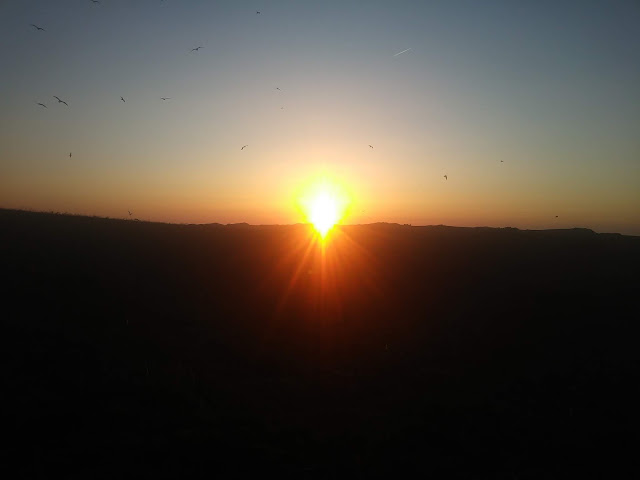 23rd March –
Puffins had arrived in many thousands, all the arrangements, creases, grooves of the rock formations, gaps and clearings on the house were brimmed up with ruby sunset light. Our happy faces were splashed with it, but many areas were already quite shadowy especially beneath the smallest trees despite very few being present on the island. The gentle winds were sweeping through and there is no more delightful music on earth than that which the wings of flying birds make when they beat against the wind. The Puffins kept on swinging placidly on the cliffs, and we followed them dreamily to soon find ourselves back in our houses, devouring our well deserved warm luxuries in form of satisfying food after an even more satisfying count of these charismatic birds. Over 30,000 were counted on that grand day.

The 2020 Skomer Team is flourishing despite the current situation, we had one or two mini gatherings almost verging on philosophy affairs; we have had scrumptious scones, bird quiz, painting and cleaning frolics galore. It cannot be put in words how much we enjoy this island and how much we would love to share that bliss with you. 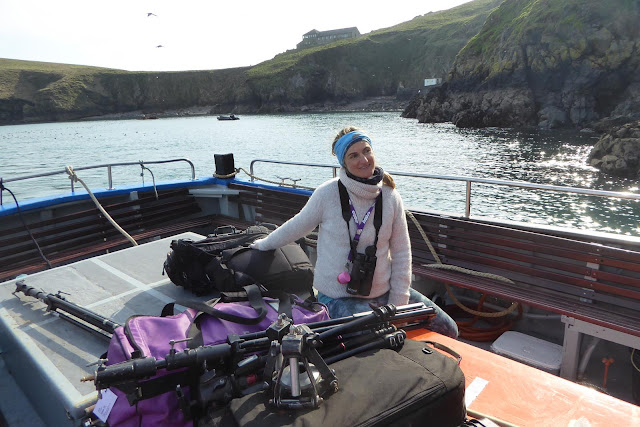 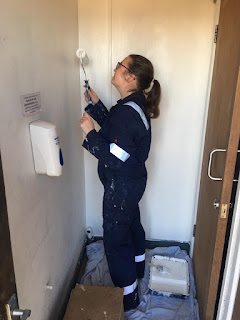 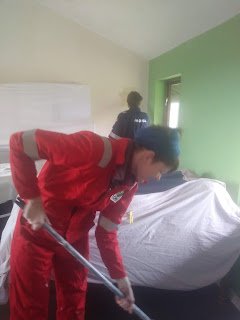 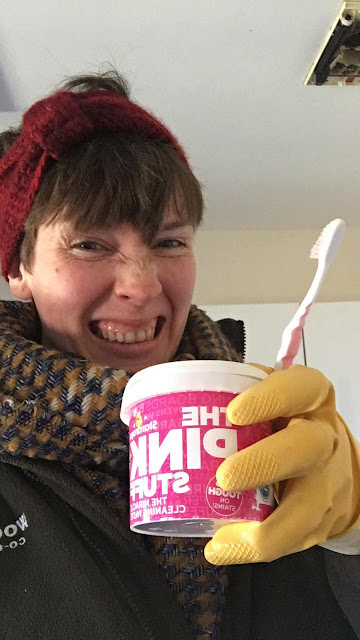 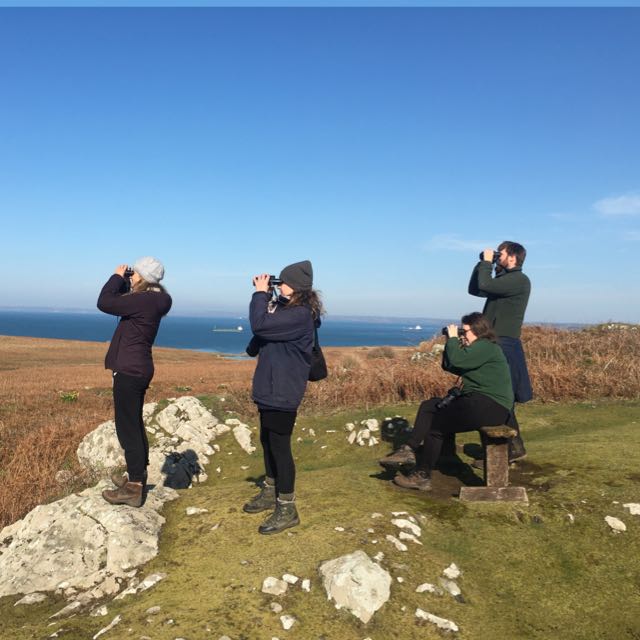 With the end of March comes the official beginning of the season and the big opening of the Skomer island of course. This time we will welcome YOU but online.

Sadly this season is far from normal and due to the current Coronavirus situation the Wildlife Trust of South and West Wales now officially closed Skomer to the public until the end of April.
You can find the WTSWW statement by clicking on this link: https://www.welshwildlife.org/announcements/skomer-and-skokholm-covid-19-update/

The initial shut down will be reviewed regularly in accordance with government guidelines.

We dare to say that the current world events are in no way easy to understand and comprehend. We find ourselves baffled and upset. However, we choose to stay positive despite the current circumstances and adapt as much as we can.
We are working on something special to deliver to you to shine a little light from Skomer.
We are lucky to be so connected with you even if it means only via internet.
Stay positive and kind. 'Skomer is waving at you cheerily' – she stated staunchly.

The island is missing you!
Virtual hugs from the Skomer Team (Sylwia, Nathan, Ceris, Catrin, Rhian)

Sylwia
Posted by Skomer Island at 16:49 No comments:

Seals season on the Wick... the highs and the lows

Hi everyone, it’s LTV Rob here again. I had an amazing summer season on Skomer - it came to a close far too quickly! Thankfully, I was given the opportunity to stay on Skomer in October to help finish off the seal monitoring on the main island. You visit some wonderful places to observe the seal beaches and the Wick was no exception - the high vantage point became one of my favourites on the island and I soon found myself visiting as often as possible. A few of the pups stood out as particularly special, so I thought I’d give you a snapshot of life on the Wick for these little pups.

The first pup on the Wick was always going to be a special one. It was born on 1st September, with pups 2 and 3 following close behind. It was the 40th pup to be recorded on Skomer, and so ‘Pup 40’ it became. This little guy stayed in the same location on the beach for most of September, suckling from mum and slowly growing larger. Mum disappeared after a couple of weeks which is completely normal – but pup 40 wasn’t going anywhere. It wasn’t until 29th September that it fully moulted and could be classed as a weaner, meaning that it had successfully survived the pup stage. When I left the island on 15th October, this pup was still there – it seemingly hadn’t yet found the energy to move…!


Pup 43
On 7th September, I was sat above the Wick doing the seal count as usual. There were 4 females present but only 3 pups. I remember thinking that the extra female looked ready to give birth and indeed the other mums seemed to be giving her space. Just as I was about to leave, I raised my binoculars to take one last look and out popped the pup. The female immediately headed for the water and dipped her head under the surface for around 5 minutes. Meanwhile, the pup lay on the beach slimy and immobile, and it was a long two minutes before it finally raised its head. I was absolutely elated and told (quite literally) everyone about it!
Though mum wasn’t seen for the next few days, the pup seemed a healthy size. It wasn’t until 5 days later that it became clear that something was wrong. The mum still hadn’t been spotted on the beach and the pup had stopped gaining weight. By 6 days the pup was crying and being repeatedly driven away by the other mums – they had their own pups to watch out for. The following day we descended for a full site visit, and I suspected what we’d find. Sure enough, Pup 43 hadn’t made it. We can’t be certain why, but it was a bad sign that the mother headed straight for the water after birth – it’s possible that she never returned. Whilst it was sad to see this happen to a pup I had followed so closely, it must be remembered that this is natural. Pups commonly die on the island each year – it sure is a difficult life for them.